Biddy Peppin – who with Pamela Zoline organised exhibitions at both Labs, remembers Jeff Nuttall’s show at Drury Lane, and comments on other Lab exhibitions:

“Opposition to the ‘established’ gallery world was fundamental to Arts Lab exhibitions, and in July 1968 Jeff Nuttall showed works that chimed particularly strongly with this repudiation of commerce. Nuttall was already known for the erotic violence of his collaborative installation sTigma in the Better Books basement in 1965, for spearheading The People Show (1966), and as one of the founders of International Times. His Arts Lab show, which immediately followed the publication of Bomb Culture in June 1968, consisted of highly unsettling assemblages, made from scavenged materials. Improvised and visceral, evoking blood, guts, disembowelment, dismemberment and decay, they differed from works by Nuttall’s U.S. contemporaries Bruce Conner and Edward Kienholz by being intentionally disposable and unsaleable, recalling early Dada experiments. Nuttall would sometimes covertly place such works in public spaces to be encountered by unwary passers-by. The photo on the left, one of few taken inside the gallery space at Drury Lane because of its dim light, also shows posters brought by students from Paris shortly after the May ’68 uprising. 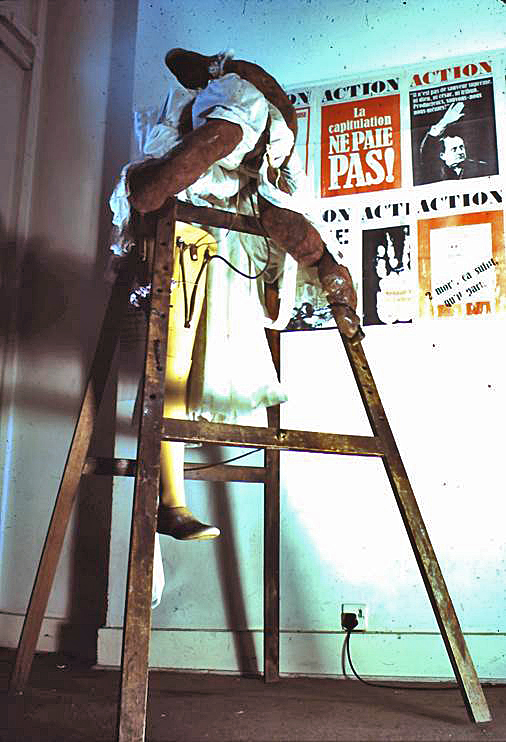 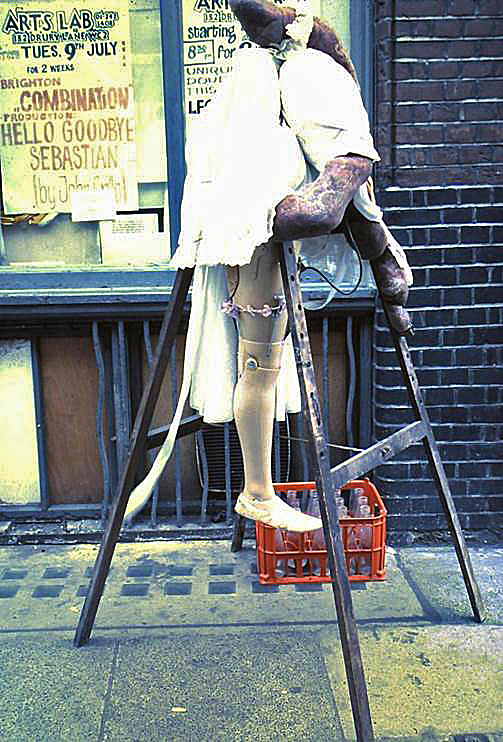 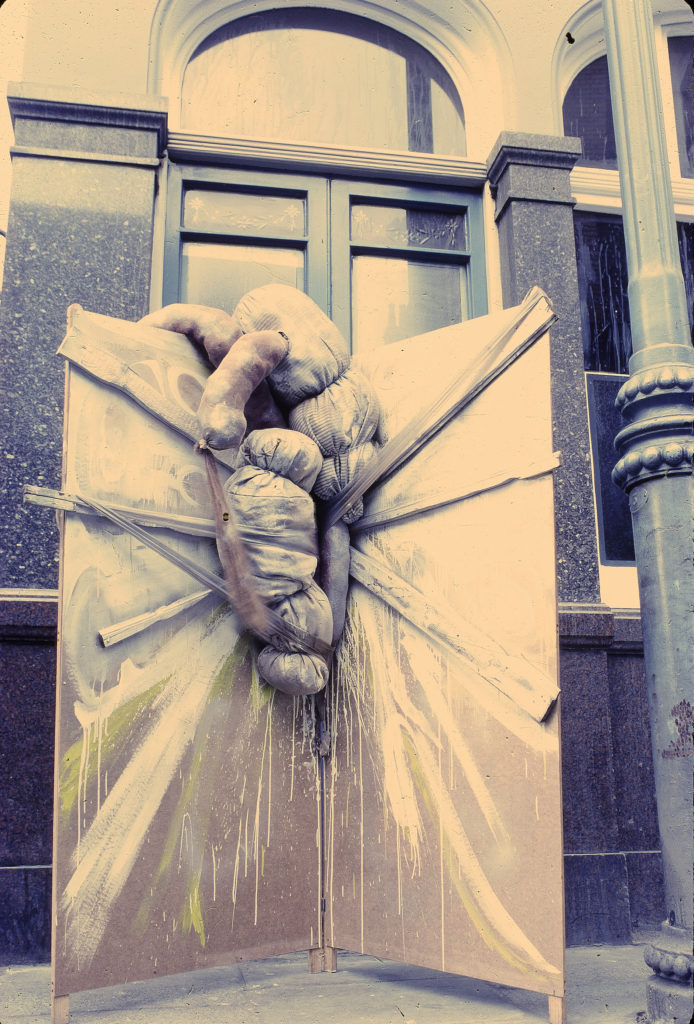 Other exhibitions reflecting the Arts Labs’ hostility to commercialism included John and Yoko’s Four Thoughts, The Self x 12, Scenes from a Hunter’s Album, and (at Robert St), J G Ballard’s notorious Crashed Cars, and UNSCULPT, an event by Ian Breakwell and John Hilliard lasting several weeks, and involving successive rituals of destruction and metamorphosis.

Despite the Arts Labs’ best efforts to show art that was beyond the pale, several exhibitions subsequently transitioned to more established venues.  Roelof Loew’s Soul City is now owned by Tate; John Latham’s roller blinds were subsequently shown at (and marketed by) the Lisson Gallery. As mechanically-reproduced multiples, Takis’ Signals were free of the ‘aura’ attributed by Walter Benjamin to unique works of art, but have nevertheless entered Tate’s collection”. BP

J G Ballard was a friend of Pam Zoline and his name appears on the Robert Street Lab’s letterhead as one of its Trustees.  His aspirations for his celebrated exhibition are summed up in this press release, (for which there wasn’t space in the book):

“Each of these sculptures is a memorial to a unique collision between man and his technology. However tragic they are, automobile crashes play very different roles from the ones we assign them. Behind our horror lie an undeniable fascination and excitement, most clearly revealed by the deaths of the famous: Jayne Mansfield and James Dean, Albert Camus and John F. Kennedy. The 20th century has given birth to a vast range of machines – computers, pilotless planes, thermonuclear weapons – where the latent identity of the machine is ambiguous. An understanding of this identity can be found in a study of the automobile, which dominates the vectors of speed, aggression, violence and desire.  In particular, the automobile crash contains a crucial image of the machine as conceptualised psychopathology. Apart from its function of redefining the elements of space and time in terms of our most potent consumer durable, the car crash may be perceived unconsciously as a fertilising rather than a destructive event – a liberation of sexual energy – meditating the asexuality of those who have died with an intensity impossible in any other form. In 20th century terms the crucifixion would be enacted as a conceptual car crash. The car crash is the most dramatic event we are likely to experience in our entire lives apart from our own deaths”.

Here is a flier Ballard provided for the show. 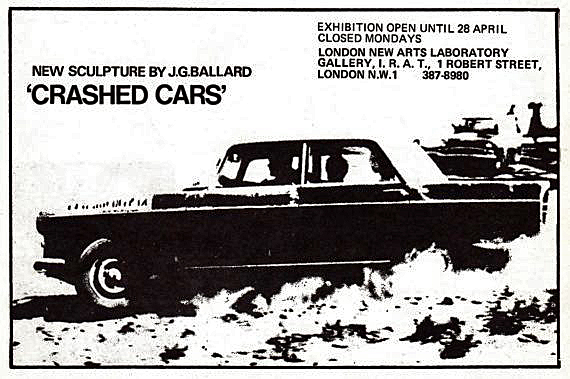 The moving image was still almost unknown in the museum and gallery context in the 60s. Scotty showed his Longest Most Meaningless Movie…  on a portable 35mm projector in the Gallery at the Drury Lane Lab on various occasions in Summer ‘68, but the Ian Breakwell / Mike Leggett display of Sheet and Unsculpt in the Robert Street Lab’s gallery in June ‘70 was still something of a novelty.  Mike had an analysis projector, capable of showing films at two frames per second, its click, click, click filling the gallery as Unword unspooled. Sheet (shown at proper speed) contains images shot during the Robert Street lab’s opening party. Mike’s Unsculpt is his recent reworking of the 1970s film and features a commentary by both Hilliard and Breakwell.

Mystery image. Found among surviving set of slides of Drury Lane exhibitions was this one. Who’s delicate structures were these?  Anyone with any suggestions please contact us via LUX! 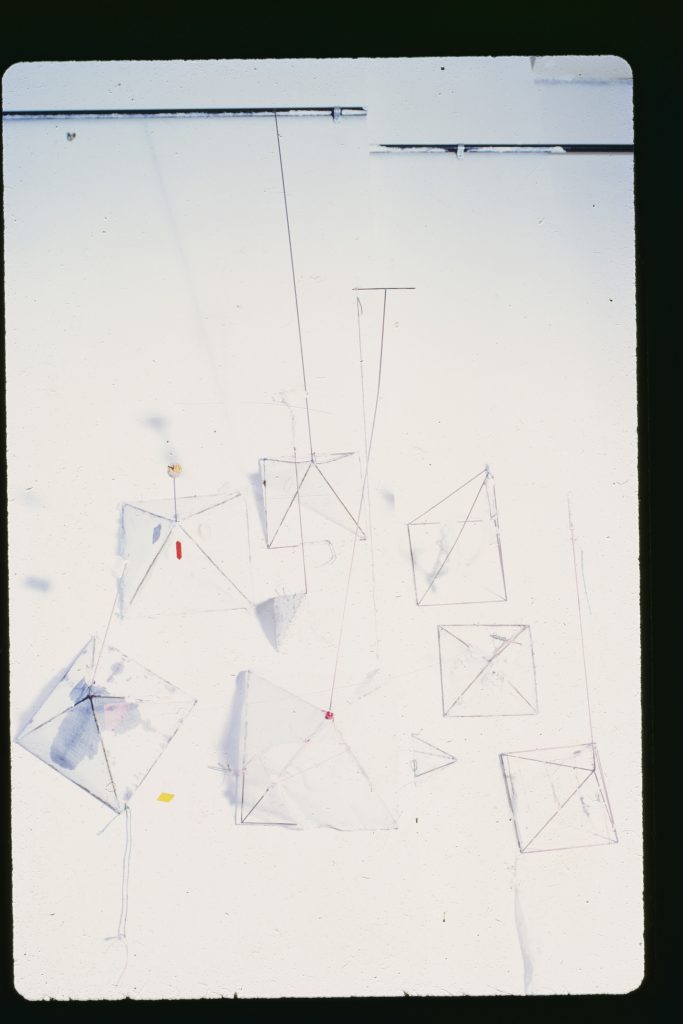 The Labs' Theatres
On being at the front desk